What is WEEE and RoHS?

Waste of electrical and electronic equipment (WEEE) such as computers, TV-sets, fridges and cell phones is one the fastest growing waste streams in the EU.

The WEEE Directive (Directive 2002/96/EC) provided for the creation of collection schemes where consumers return their WEEE free of charge. These schemes aim to increase the recycling of WEEE and/or re-use.

EU legislation restricting the use of hazardous substances in electrical and electronic equipment (RoHS Directive 2002/95/EC). The legislation requires heavy metals such as lead, mercury, cadmium, and hexavalent chromium and flame retardants such as polybrominated biphenyls (PBB) or polybrominated diphenyl ethers (PBDE) to be substituted by safer alternatives.

Furthermore, the responsibilities for manufacturers, dealers and consumers are defined clearly.

What is STEPCRAFT doing to meet the directives?

We established two provisions to achieve the objectives:

How do I know that a device meets the WEEE directive?

All electrical and electronic equipment placed in the EU market has to labelled with the following symbol: 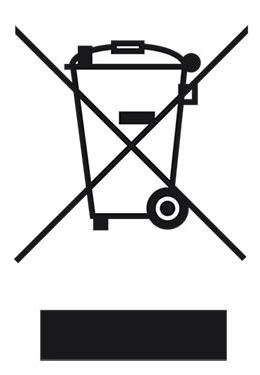 Devices with this label are not intended to be disposed via the residual waste. The responsible producer or the importer respectively has to take of the recycling.

Batteries and accumulators play an essential role to ensure that many daily-used products, appliances and services work properly, constituting an indispensable energy source in our society.

By law end-users are required to return used batteries and accumulators. Disposal through the household waste is prohibited!

Batteries containing contaminant material are labelled with the following symbol, which indicate the ban on disposal through the household waste:

You thereby fulfill your legal obligations and make a contribution to environmental protection!

Too bad, now we have to go back to the glass ball or read in the coffee grounds to understand our visitors ...

Why do we have to do that? Quite simply, you have forbidden us to watch Your steps on our site with Google Analytics. That sounds dramatically to You, we know. But look at it: we do not even know who YOU are, we just see that SOMEONE looks at our pages, how he/she does that, how long this SOMEONE lingers on the respective pages, etc. We do not know who You are, whether You are male or female, how old You are, how Your weight is - no idea. Nor do we pass this data on to Google, we don not have them not at all! Nevertheless, this data of SOMEONE will provide us with valuable information about our site, we want You to like everything here, that You feel good and - of course - buy our products ...

So we can see where there are problems. If many visitors leave our site during the purchase process while choosing the payment method, we know that something is wrong and can improve it. Sounds good, right? Thats good for You and good for us. So it´s a win-win situation. So let us accompany You on Your way through our store. Deal?

Thanks, Harry can pack the glass ball ...

Great, you got it! Now we can work better on our offer again!